The Sting Villa in Figline (Photo: courtesy of gonews.it)

In 1997 Sting and his wife Trudie bought Villa Il Palagio in Figline Valdarno. The estate consists of a large villa and woods, vineyards, olive groves, and a converted barn that functions as a recording studio. Situated in the Arno valley south of Florence (a leisurely 30 minute drive north from Il Poggiolo), Sting’s 900 acre estate now features a recently opened a shop that sells organic farm produce: wine, olive oil, honey and salami made from the famous “cinta senese” breed of pig . Until summer 2010 this produce was only available in luxury outlets in the US and Britain (such as Harrods in London), but now it is also available to visitors to the Valdarno at the shop called “Tenuta Il Palagio.” In an interview with a local television station, Sting declared: “When I came here I wanted first of all to feed my family with genuine foods and quality produce, grown in a healthy environment …. I also wanted to use agriculture with practices that would nourish, rather than deplete the land.”

For a bird’s eye view of the estate (it is off the Strada Provinciale 16 that goes from Figline to Greve in Chianti) look it up on Bing’s maps. For more details on how this estate was acquired and restored, check out the article in Food&Wine: “Sting & Trudie’s Tuscany: An Organic Tale” By Frank Digiacomo. 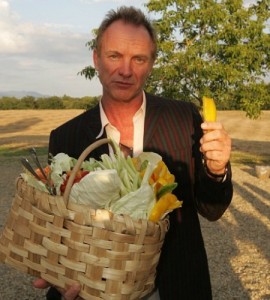 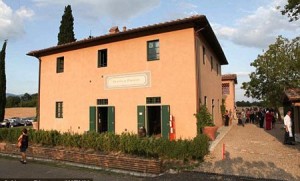 Artists in Residence at Il Poggiolo

A couple of summers ago, the artist Eugenia Pell and her daughter Christina Randall...