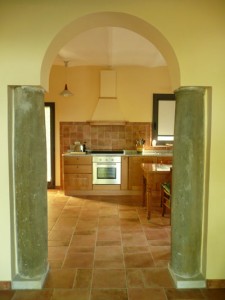 View of kitchen from living room, with 15th-century columns

This is an article that I wrote for Jessie at Wandering Educators, which I am reprinting in part here.

In 1994 Allen and I bought the property we had been renting for over 10 years. The reasons why we ended up in Tuscany – on a hilltop in the Valdarno – are totally serendipitous, and entirely too long to go into here. But we did it, and lived in happy nonchalance, raising our daughter and commuting to work in Florence until the economic crunch began to make itself felt. In 2005 we had the belated realisation that this property had better help maintain itself, otherwise we would find it very difficult to keep up the land and buildings after we retired. I keep buying lottery tickets with blind faith, but in the meantime we bit the bullet, hocked our souls to the Banca Toscana, and decided to carry out a dream: to restore and convert the villa’s barn into a rental cottage. The idea was that holiday rentals would help with the mortgage, garden maintenance, and miscellaneous upkeep until – when we are well into our dotage – we downsize and move into it ourselves. So this is what we did….

The Fienile was originally a traditional barn on an 18th-century Villa property, located in theValdarno area of Tuscany, in the foothills of the Chianti, right in the middle of theFlorence-Siena-Arezzo triangle.

The villa – called “Il Poggiolo” (little hill) – originally presided over a working farm producing wine and olive oil. The barn was built in the early 1800s to house animals, to store hay and corn, and to shelter agricultural implements : it still features an domed oven once used to bake bread. In 2006 we carried out what is called a “conservative” restoration in order to transform a crumbling structure into a modern house with all comforts. However, as the Fienile had recently been classified as a building of historical interest, it was subject to a series of rather complicated architectural restrictions: the “silhouette” of the roof could not be altered, and almost all openings on the outside walls had to be preserved as they were….

The result is an architectural masterpiece (yes, we are very proud) which preserves the traditional “feel” of the original building materials while creating a light and comfortable dwelling out of what was once a humble barn.

You can read the rest of the article “Il Poggiolo Tuscany – A Fienile (Barn) Conversion on Villa Property” on Wandering Educators!

For anyone who is considering a holiday in Tuscany during the winter, the weather...