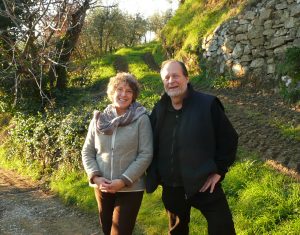 Sara and Allen are both historians attached to academic institutions in Florence. Il Poggiolo has been in their family since 1968, and they have made it their permanent home since 1980.

Read the blog about Wine & History by Allen!

Il Poggiolo (meaning “small hill”) is a place name that dates back to the later Middle Ages. The little valley that runs below the access road was already called Rondinaia (the home of swallows) in the 15th century. In summer evenings you can still see the swallows fly in sweeping circles above the valley floor.

In the later 18th century, Il Poggiolo was a farm belonging to the Catholic Church. In the first decades of the 20th century it was sold to a bourgeois family from Montevarchi. As was customary at that time, the family used it as a country retreat and gentrified part of it into a villa, where they occupied a separate apartment now called the Casa Colonica.

As in most small Tuscan agricultural holdings, both owners and farmers occupied separate quarters in the same building, strictly upstairs. On the ground floor were stabled the oxen, pigs and sheep. This accounts for the large size of most Tuscan farmhouses, and the variety of architectural details within the same structure (such as superior stonework in the owner’s quarters).

Next to the villa stands the Fienile (barn). This building was used for a variety of purposes: storing tools, drying grain and corn to feed livestock, stockpiling charcoal, and baking bread every week in a domed brick oven. Like most farm buildings, the barn was adapted and expanded according to need, which accounts for its rambling layout. Transformed into a country cottage in 2006, the conversion of this agricultural building was careful to respect traditional architectural details while embracing the aesthetics of Italian design.

Il Poggiolo produced fine quality wine and olive oil until 1987, when the current owners made the difficult choice to abandon the land in favour of an equally taxing occupation – that of the professional historian.